Find us on Google+
David And Goliath | Spiritual Art Of War 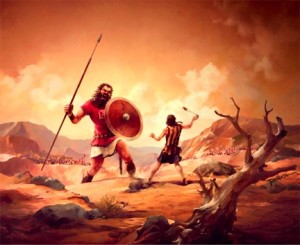 In life’s battles, God has his prophetic art of war. In your life particularly, He has plans for your victory and success in whatever wars you face. You just have to read through the Bible and study on numerous accounts that God has won for His people.

A good example from the Bible has to be the story of David and Goliath. Let’s look at that Scripture to see an example of the prophetic art of war in action: In 1 Samuel 17, Saul and the men of Israel go to war against the Philistines yet again. Verse 4 reads, “And a champion went out from the camp of the Philistines, named Goliath, from Gath, whose height was six cubits and a span.” We know from this passage that Goliath is an influencer in the Philistine armies; his height and his fighting skills have made him a leader among his people. In verses 8-9, Goliath challenges the men of Israel to send their own champion to fight him: if Goliath kills the Israelite champion, Israel will serve the Philistines, and vice-versa.

I’m sure you’re familiar with the rest of the story: only David, youngest among his brothers, has the courage to fight Goliath. After he fells him with a stone from his sling, he cuts off Goliath’s head with his own sword—and all the Philistines flee (1 Samuel 17:51).

There are five dangerous faults that may affect a general:

1. Recklessness, which leads to destruction

2. Cowardice, which leads to capture

3. A hasty temper, which can be provoked by insults

4. A delicacy of honor, which is sensitive to shame

5. Too much compassion for his men, which exposes him to worry and trouble.

Learn more about the strategies in the Spiritual Art of War and find out your personal strengths and weaknesses. Let Bishop E. Bernard Jordan’s book guide you in winning your battles! Click here for more information.